Despite the many disruptions and plans canceled because of COVID-19, in-person exchanges between the Wisconsin National Guard and the Papua New Guinea Defense Force remain on-track as the partnership between the two entities continues to grow.

During the trip to Wisconsin, the Papua New Guinea Defense Force representatives traveled to different facilities, met key leaders, and experienced some of Wisconsin’s highlights including a tour of the state capitol, a cheese tasting, and overhead views of Wisconsin’s snow-covered, sprawling farms.

Maj. Roselyn Wia, staff officer two to the director of health services for the Papua New Guinea Defense Force, said that upon stepping off her plane she immediately noticed the snow and a few leftover Christmas lights.

“The snow-covered pine trees reminded me of a postcard,” stated Wia.

Lt. Col.  Derrek Schultheiss, the State Partnership Program Director, has been building a relationship with the Papua New Guinea Defense Force over the last two years since the partnership began.

“I found that there are more parallels than differences between our militaries,” stated Schultheiss.

Maj. Sarufa Eka, who is in charge of operations for the military’s engineering battalion commented that there is one glaring difference.

“It is much colder here,” he joked.

Some of the common ground their organizations share is adapting their militaries and their infrastructure to a modern world and mission sets.

Lt. Col. Boniface Aruma, acting director of force preparation, explained that the infrastructure of his military is stems from the 1970s when Papua New Guinea only had three million people.

“Now that we have closer to eight or nine million people, our infrastructure must grow too,” stated Boniface.

Col. Jeffrey Alston, the commander of the 32nd “Red Arrow” Infantry Brigade Battalion Combat Team, reflected on the culture of the National Guard in the 1970s.

“You used to see a howitzer sitting on someone’s farmland because someone in the company knew someone who would allow us to use their land to train,” stated Alston.

Boniface responded that this resonated, resembling the way that they often rely on their service members’ social connections to find resources and space for training.

“I am laughing, because it is so similar, human beings are the same everywhere I suppose,” stated Boniface.

Another challenge both military forces share is the challenge of addressing the universal needs of all troops.

“It is clear that the [Wisconsin National Guard] attends to their Soldiers with a fine-toothed comb,” stated Wia. “I was especially impressed by how they attend to mental health.”

The Soldier Readiness Program ensures that each Soldier is prepared to deploy quickly which has become increasingly important for the National Guard’s domestic missions that have included many no-notice civil unrest and COVID-19 response missions over the last two years in addition to federal overseas deployments.

“Much like the National Guard, we also respond to elections, civil unrest and border control,” Boniface stated, referring to the border his country shares with Indonesia.

Alston, a self-described history buff, stated that it is interesting to trace Wisconsin Soldiers to Papua New Guinea in World War II.

“It deepens our ties, and I’m grateful for this opportunity to work with them,” stated Alston. Aruma stated that he was unaware of their shared history until they entered into the State Partnership Program.

“I started learning more about the Wisconsin National Guard and realized the magnitude of history we share,” stated Aruma.

The partners have made significant progress in recent months, with a Wisconsin National Guard delegation conducting its first visit to Papua New Guinea and Wisconsin’s adjutant general traveling to Hawaii for a series of meetings and conferences with his counterparts from Papua New Guinea and other military leaders in the region. The partners have also collaborated via several virtual exchanges on different topics over the past two years.

“The experience of working with PNGDF medical teams energized me tremendously and made me feel privileged to be part of the Wisconsin National Guard, where we take our standard of training and amount supplies for granted,” she said.

Vollrath said she hopes to continue to partner with their medical teams in the coming years and share written medical training information and curriculum that they can employ on a regular basis with military forces in Papua New Guinea.

Wisconsin National Guard leadership selected a dozen Soldiers to conduct civil disturbance and command and control training with the PNGDF in preparation to deploy in support of their upcoming national elections. The teams worked side-by-side with other NATO allies including the Australian Defense Force which has been supporting the pre-deployment mission since February.

Sgt. Gage Meyers, a military police officer with the Kenosha, Wisconsin-based 32nd Military Police Company, stated that the team from Wisconsin understands the core of the PNGDF’s mission because they each personally deployed to similar missions in the Badger State multiple times over the last two years.

“Our prior experience supporting local law enforcement in Wisconsin during periods of unrest helped us find common ground with our counterparts,” stated Meyers. “We were able to relate the training to shared experiences and real-world problems which gave us credibility.”

Lt. Col. Derrek Schultheiss, the Wisconsin National Guard’s State Partnership Program director, said that the team brought something to the table that is unique to the National Guard.

American active-duty forces are prohibited from responding to domestic civil unrest missions under the Posse Comitatus Act unless expressly authorized by law. The National Guard is generally the only component authorized to respond to domestic civil unrest in America, making it an ideal partner for militaries that share similar responsibilities such as the PNGDF and ADF.

Besides common ground between missions, the Wisconsin Guard shares a unique history with both the Australian and Papua New Guinean forces.

During World War II, the 32nd “Red Arrow” Infantry Division, which consisted of the Wisconsin National Guard and some of the Michigan National Guard, engaged in intense fighting alongside Australian and Papua New Guinea forces against the Japanese through multiple campaigns in Papua New Guinea. The Buna Campaign is often noted by historians as particularly brutal. The Red Arrow engaged in other major campaigns in Papua New Guinea, including in Saidor and Aitape. By war’s end, the Red Arrow had logged 654 days in combat – more than any other division in the war.

In contrast to each nation’s respective service in World War II, today’s troops are largely interested in peace-keeping and conflict de-escalation.

Cpl. Pieter Murtagh of the 2nd Cavalry Regiment, Australian Defense Force, explained during a training session how to set the tone during interactions with civilians on the PNGDF’s upcoming mission.

“This is the point that is going to set the tone,” Murtagh explained during training. “You want to walk up, use a loud voice, use a polite voice and normal conversation level.”

As Murtagh encouraged Soldiers to consider how they relate to the people they serve, Wisconsin National Guard members were looking for ways that they could serve the community that surrounded Taurama Barracks.

Sgt. 1st Class Kurt Ullenberg, initiated a relationship between a nearby school and his wife’s classroom in Wisconsin.

“Something that makes Guardsmen valuable in this program is our connections to our communities back home and our ability to connect with not just other Soldiers, but the communities that support those Soldiers,” stated Ullenberg.

Lt. Col. Aaron Freund, the Wisconsin National Guard’s state provost marshal, supervised the team and reflected on their impact as the visit came to a close.

“It is a lot bigger than the training here today,” stated Freund. “What we do here dictates how we are seen in the world.”

Lt. Col. Derrek Schultheiss stated that each interaction that happened through the partnership program is part of a much larger picture.

“We are building a relationship here even if it is just one tiny piece at a time,” he said. “Each person we brought here is helping plant those seeds and will have a huge impact even if it is not immediately apparent.”

Maj. General Mark Goina, Papua New Guinea’s chief of defense force, commented during a meeting between international partners and state officials on March 8, that he is very happy to see that this exchange is happening.

“I think that our countries share a lot of issues and I am very supportive of the program,” stated Goina. “I look forward to continuous engagement.” 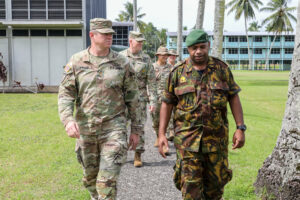