PrEP is medication that reduces the chances of getting HIV by up to 99 percent. The medication is used worldwide to prevent HIV infections, and it is recommended for anyone who is at risk of contracting HIV through person-to-person transmission.

“The United States is glad to support our partners, the Government of Papua New Guinea and the National Department of Health with this donation and rollout,” said Joseph Zadrozny, Chargé d’Affaires, United States Embassy. “PrEP is completely safe, and I have no doubt that with proper use, it can help turn the tide of HIV infections here in Papua New Guinea.”

USAID, through implementing partner FHI360, will support the rollout of PrEP in the NCD, in close collaboration with the National Department of Health, National AIDS Council Secretariat, NCD’s Provincial Health Authority, and community partners including the Key Population Advocacy Consortium, Hope Worldwide PNG, and Anglicare PNG. In 2023, PrEP services will launch in three selected sites in the NCD: Heduru, Lawes Road and Anglicare clinic.

The U.S. government aims to achieve inclusive, resilient, and sustainable control of the HIV/AIDS epidemic in PNG in collaboration with partners like the National Department of Health, and FHI360, and through the leadership of the affected community. Through its five-year, $17.2 million HIV Support in Papua New Guinea Activity funded through PEPFAR, USAID works with government counterparts, multilateral and donor organizations, and local partners to contribute towards the HIV/AIDS response in the NCD and nationally aimed at strengthening PNG’s HIV/AIDS interventions to bend the curve towards epidemic control. 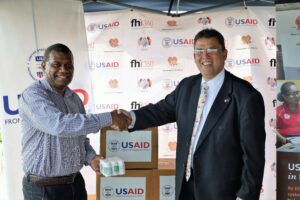