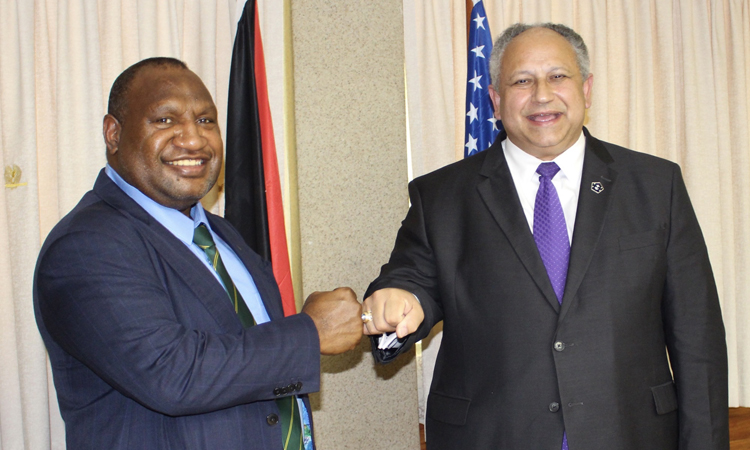 While here, Del Toro met with representatives of the government of Papua New Guinea to include the Prime Minister to discuss ways our countries can establish a free and open Indo-Pacific region together.

In Papua New Guinea, Del Toro made a special visit to the Naval Construction Battalion, better known as the Seabees, who are constructing new facilities in support of the revitalization of the PNGDF maritime base at Lombrum. The Seabees are in Manus province temporarily, working together with Papua New Guineans and the Commonwealth of Australia to enhance the capabilities of PNG forces.

The government of Papua New Guinea invited the U.S. military construction teams to Manus to support the renovation of the PNGDF maritime base, the HMPNGS Tarangau. Construction personnel are building a regional maritime training center, a dental clinic, and a small boat team facility. These upgrades strengthen the defensive capabilities of the PNGDF’s forces operating there.

After touring the HMPNGS Tarangau, Secretary Del Toro said, “We are thrilled to be working in partnership with the Papua New Guinea Defense Force again. The Seabees have been here before, and we are happy to be back. Papua New Guinea extended their hand in friendship to us 75 years ago, and we are building on that foundation to address shared challenges. Together, America and Papua New Guinea are partnering to ensure a more secure Indo-Pacific region.”

The U.S. construction projects build on the extensive work that has already been done at Lombrum Navy Base by the Commonwealth of Australia, including architectural designs and foundational development, and purchase of maritime vessels.

US-PNG cooperation in Manus is part of a legacy that dates back to 1944, when allies seized Lorengau and Los Negros Island, cutting off Japanese supply and communication lines. Over the course of the following year, the Seabees led a force of more than 20,000 personnel who transformed Manus and neighboring Los Negros into the primary location for service, supply, and repair of the U.S. Seventh Fleet. The construction work of the Seabees in the Admiralty Islands is seen as one of the most amazing feats of military engineering of WWII.