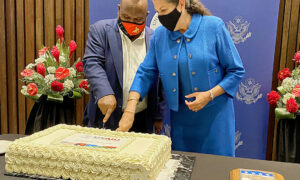 U.S. Embassy Port Moresby marked the occasion on Wednesday evening with a small celebration at the APEC Haus, highlighting the enduring relationship between Americans and the citizens of these three nations. Prime Minister James Marape, New Zealand High Commissioner Phillip Taula, representatives from the Japanese Embassy and Australian High Commission, and several PNG ministers and key partners joined the celebration.

“The United States is extremely grateful to be celebrating this milestone with our partners,” U.S. Ambassador to Papua New Guinea, Solomon Islands, and Vanuatu Erin E. McKee said, “USAID is honored to have worked with Papua New Guinea, Solomon Islands, and Vanuatu since their independence. These countries have chosen to partner with us since we first extended our hand in friendship. We’ve been able to achieve great things together and look forward to many more years of partnership to come.”

Founded in 1961 by former US President John F. Kennedy, USAID began its programs across the Indo-Pacific region right away, from India to the Philippines. USAID supported the newly independent governments of Papua New Guinea, Solomon Islands and Vanuatu from the start, providing guidance, expertise, and financial backing from the American people. Early partnerships focused on natural disaster mitigation and recovery, and soon evolved into English language training, agriculture and fisheries best practices, stronger governance building, and economic activities.  In 1978, an official USAID headquarters was established for South Pacific Islands along with the new U.S. Embassy in Suva, Fiji.

USAID’s Acting Mission Director for Philippines, Pacific Islands and Mongolia, Sean Callahan, said, “It is an honor to celebrate our partnerships with the peoples of Papua New Guinea, Solomon Islands, Vanuatu. In the 1970s when many Pacific Islands were becoming independent, USAID was proud to stand with you. We stand strong with you today and going forward for better development for all peoples.”

USAID programs in Papua New Guinea, Solomon Islands and Vanuatu continue to enhance partnerships for addressing pressing urgent development needs, and the United States stands committed to advancing growth and prosperity for all.