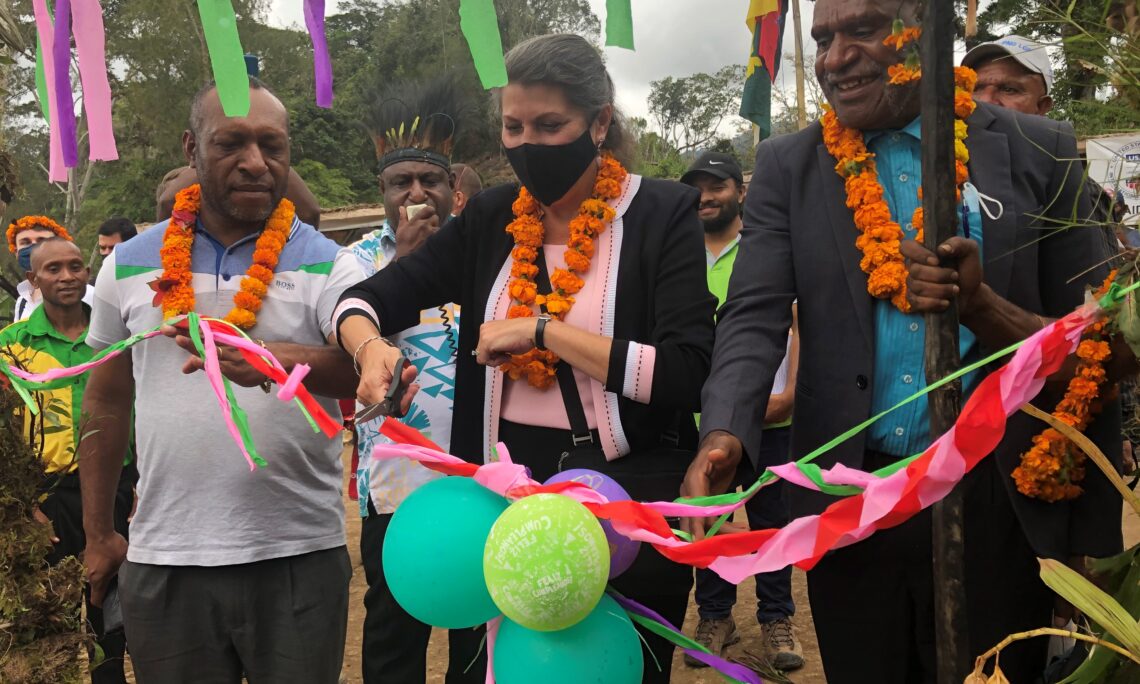 Jiwaka, Papua New Guinea – U.S. Ambassador to Papua New Guinea, Solomon Islands, and Vanuatu Erin Mckee witnessed the signing of the Mt Goplom conservation deed at Kwiop village in the Jimi District of Jiwaka Province. Ambassador McKee joined PNG government representatives led by Jimi Open MP and Minister for Community Development, Youth and Religion Wake Goi, and Jiwaka Governor William Tongamp, among other community leaders to witness the important signing which sets a benchmark for similar communities in PNG to use their land rights to preserve their unique biodiversity for generations to come.

“Papua New Guinea’s biodiversity is one of the richest on the planet and it contains so many species, so many varieties that good conservation, natural resource management and governance of this rich resource will benefit not only Papua New Guinea, but the rest of the world,” said Ambassador McKee.

PNG is considered one of the world’s 17 biologically megadiverse countries and one of the last frontiers for biodiversity conservation. The forest-clad Bismark Range lies in central PNG, home to over 50 percent of New Guinea’s biodiversity, including unique endemic species such as Goodfellow’s tree-kangaroo and the Eastern long-beaked echidna.

Natural resources and biodiversity play a critical part in PNG’s economy as a source of water, energy, and livelihoods.  More than 85 percent of the population live in rural areas where they depend heavily on these resources for their livelihoods and subsistence, but as the country continues to move forward, these natural resources are under threat.

The U.S. government, through the United States Agency for International Development (USAID), firmly supports PNG in promoting sustained environment resilience and economic growth. Through the Lukautim Graun Project, USAID has been working closely with the Wildlife Conservation Society (WCS) and other partners to strengthen community livelihood to sustainably promote and support community conservation efforts along the Bismark Range.

At the heart of the Range lies Kwiop, home to the indigenous people of Kwiop, in the Jimi District. Led by their home-grown organization, Kuakam Landowners Founders (KLF), the community has been working with USAID and Wildlife Conservation Society (WCS)to protect their forest, reforest degraded lands, understand wildlife dynamics in their ancestral territory, and develop conservation livelihood projects. The signing of this conservation deed ratifies their legal rights to conserve and protect Mt. Goplom Conservation Area of up to 4,070 hectares.