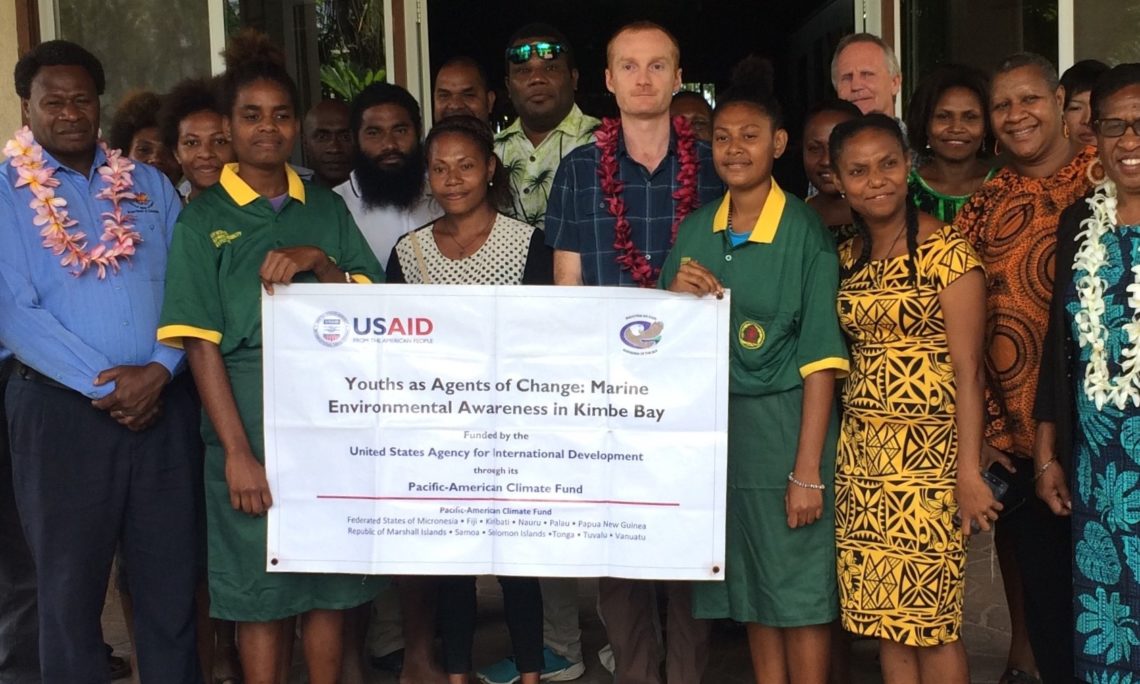 USAID environment team with students and teachers after the launch of the Marine Environment Education Program Guide in Kimbe, West New Britain Province.

Kimbe, West New Britain: The U.S. government, through the United States Agency for International Development (USAID), launched a teacher’s guide for primary schools that will educate Papua New Guinea students about their marine environment and the need for conservation. Through its Pacific-American Climate Fund, USAID awarded a grant in October 2017 to Mahonia Na Dari Research, Education and Conservation Centre (MND) to leverage its tried and tested Marine Environmental Education Program (MEEP) to develop a curriculum to teach and inspire students to champion marine conservation. The working committee, which included officials of the Department of Education, ensured that the MEEP curriculum was aligned with the PNG Education Department’s National Curriculum. The marine environmental education curriculum, approach and materials can therefore be rolled out to the rest of the country and to other countries comprising the Coral Triangle, also known as the “Amazon of the Seas.”

“We can still make a difference by working together, before the biodiversity of Papua New Guinea’s ecosystem is damaged or destroyed irretrievably. This is what makes our cooperation on protecting Papua New Guinea’s biodiversity so vital.  The United States Agency for International Development, or USAID, aims to shape a future in which both people and biodiversity thrive via improvements in economic prosperity, social equity and environmental stewardship,” said USAID Officer Robert Pierce as he reaffirmed the American people’s commitment to the well-being of the peoples of the Pacific Islands.

With the support of USAID, the Youth as Agents of Change: Marine Environmental Awareness in Kimbe Bay project raised the marine biodiversity awareness of communities in three districts surrounding Kimbe Bay, with over 10,000 primary students reached through the MEEP outreach sessions and 120 secondary and college students trained in MEEP intensive courses. The bay is considered a key biodiversity area which hosts over half the world’s species of hard corals and over 900 species of fish.

The MEEP Teacher’s Guide provides directions for teachers in communicating to their students the importance of marine ecosystems. It also offers relevant background information for teachers, flexible lesson planning, and resources to support teaching. The MEEP Guide encourages teachers to relate its factual content with the local situation and provide opportunity for hands-on active involvement in conservation and climate adaptation initiatives.

Through the Pacific-American Climate Fund, USAID has implemented 28 resilience projects in 12 Pacific nations, with six of these projects located in Papua New Guinea.