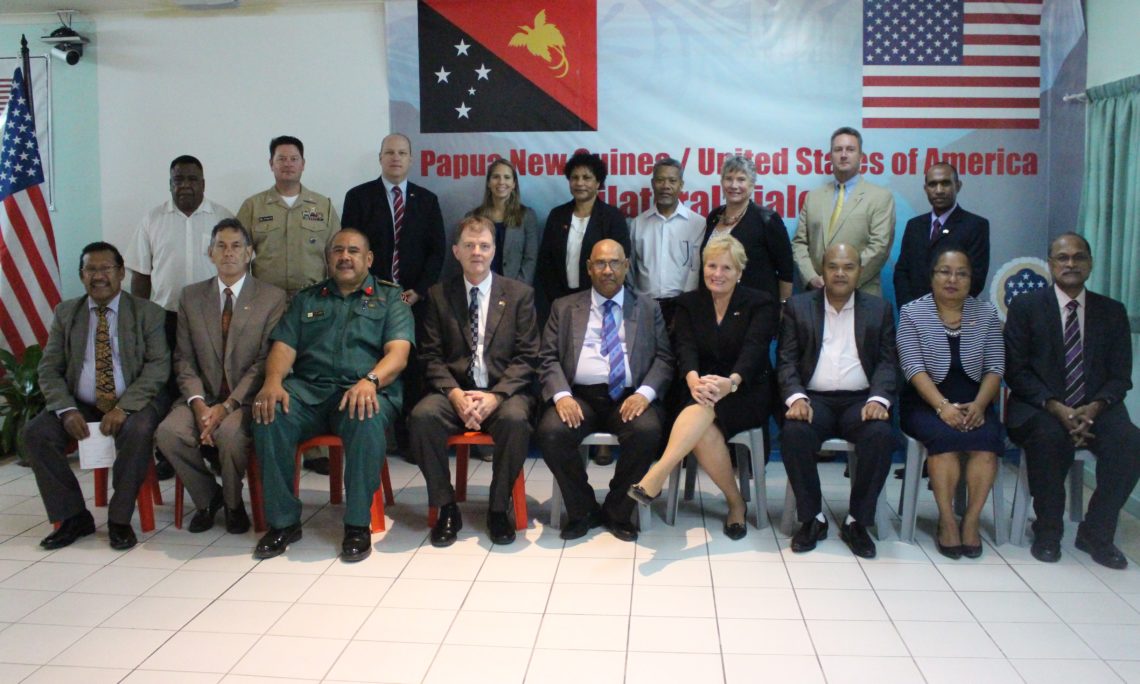 Port Moresby, Papua New Guinea: The PNG-US bilateral dialogue on May 25 2017, focused on the common interests of the two nations.

U.S. Ambassador Catherine Ebert-Gray reiterated U.S. support for the upcoming APEC meetings and said she was encouraged by the long-term future of Papua New Guinea.

In his opening remarks, Mr. William Dihm, Acting Secretary, Department of Foreign Affairs and Trade said the dialogue was an avenue for information sharing that provided the opportunity for Papua New Guinea and the U.S. to advance existing and potential areas of mutual interests for both countries.

Secretary Dihm told participants that the dialogue process was an initiative of the Department of Foreign Affairs’ senior management and was focused on strengthening Papua New Guinea’s bilateral relations.

The dialogue, held at the National Research Institute, covered trade and investment, security, customs procedures, cooperation on gender issues, US education and exchange opportunities, immigration, UN voting alignment, and preparations for the Asia-Pacific Economic Community (APEC) Leaders’ Summit that Papua New Guinea will be hosting in 2018. Representatives from PNG government agencies and departments were joined by representatives from various sections and agencies at the U.S. Embassy to discuss their respective portfolios and plans for the future.

“While we are prepared to present an array of areas that we trust will deepen your understanding of our priorities, we are also eager to hear Papua New Guinea’s presentations and we respect and continue to work within your nation’s policy framework, including the StaRS, Medium Term Development Plan and Vision 2050.” Ambassador Ebert-Gray said.

“We are encouraged by the call for effective leadership during this year’s elections and by the growth of civil society focused on such vital issues as your environment, human rights, and good governance.” said Ambassador Ebert-Gray.

“American participants have been pleased with policy developments; and I want to underscore the pledge made last December here in Port Moresby by Admiral Harris of the U.S. Pacific Command when he told your leadership that the United States would support PNG in its efforts to host a successful APEC Summit,” she said.

In closing remarks, both Ms. Barbara Age, Deputy Secretary for Policy, Department of Foreign Affairs and Ambassador Ebert-Gray thanked all the participants and committed to continuing the dialogues to ensure on-going cooperation in areas of mutual interest.