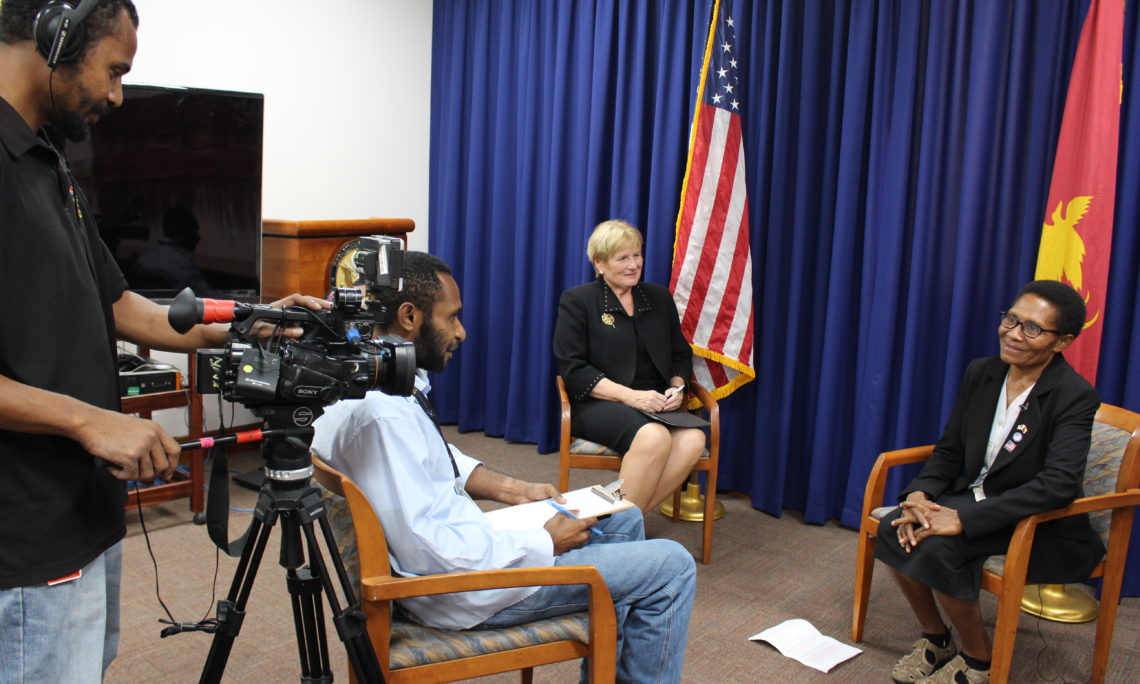 Port Moresby, Papua New Guinea: Veronica Simogun, recently honored as the East Asia and Pacific awardee for the 2017 U.S. Secretary of State’s International Women of Courage Award, returned to Papua New Guinea yesterday. Ms. Simogun was honored as this year’s awardee in recognition of her work as an advocate for women and children who have been victims of violence.

Ms. Simogun was in Washington, D.C. for the official awards ceremony on March 25 and a program of activities as part of the State Department’s observance of International Women’s Day in March.

First Lady Melania Trump and Undersecretary of State for Political Affairs Thomas A. Shannon presented the 2017 Secretary of State’s International Women of Courage Award to Ms. Simogun and twelve other extraordinary women from around the world on March 30th at the U.S. Department of State.

On April 1, Ms. Simogun and her fellow honorees travelled to cities across the United States to engage with the American people. She visited Pittsburgh, Pennsylvania while other honorees traveled to Atlanta, Georgia; Denver, Colorado; Des Moines, Iowa; Minneapolis, Minnesota; New York, New York; Pensacola and Tampa, Florida; Portland, Oregon; and San Diego, California on their individual programs. The women reconvened in Los Angeles to reflect on their visit and discuss ways to work together to improve the lives of women and girls around the world.

Ms. Simogun is the founder of the Family for Change Association based in Wewak, East Sepik Province. Because of the support she provides for victims of violence, her own life has been threatened yet she continues to work tirelessly and selflessly.

Ms. Simogun started Family for Change in response to the high levels of family violence that she was seeing in her community. She has taken a courageous stance in rescuing and caring for vulnerable women and children in the face of threats of violence and verbal intimidation directed at her. Because of her work to protect them from abusive partners and relatives and to find safe homes for victims, she has become a hero to thousands in her community.

Family for Change has provided support services for more than 6,000 cases.  The Association has also repatriated or safely reintegrated more than 60 survivors of domestic violence, providing durable solutions in a society where there are few options for women who choose to leave abusive relationships.  In addition, Ms. Simogun has developed a program which she presents in schools to address the root causes of family violence and promote behavior change for men and boys.

The Secretary of State’s International Women of Courage Award annually recognizes women around the globe who have demonstrated exceptional courage and leadership in advocating for peace, justice, human rights, gender equality and women’s empowerment, often at great personal risk. Since the inception of this award in 2007, the Department of State has honored over 100 women from more than 60 different countries.